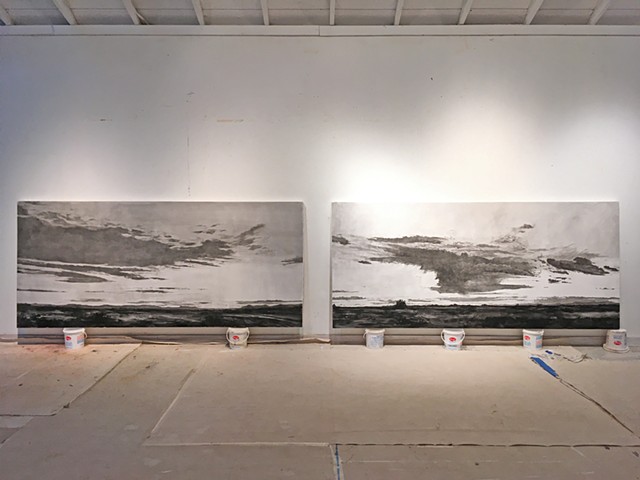 ‘At the Edge of the Day’

In 2014 I was awarded an artist residency in Marfa, Texas. The huge expanses of land and sky inherent to Marfa offered a new perception of space, and created in me a longing to bring those qualities into my work.

I remember thinking ‘I would like to paint a sunset’. That thought was put on the back burner until five years later when I headed outside of Taos, New Mexico, in the Fall of 2019 and produced 12 small paintings on site followed by larger tonal works on canvas. Taking a detour away from my long journey with abstraction and using such a ‘traditional’ subject as the landscape with its extensive history prompted a number of questions. Why this? Why now? The desire to ‘return to nature’ might be thought of as an escape from existential worries, from a world rife with contradictions and ambiguities, where nature can provide a palliative to anxieties, or it can be a wishful return to some romantic ideal. Neither of these premises were the impetus for these works but they were considerations that I thought about.

These works represent that space in time when the day is ending and night begins--- twilight, sunset. This period of the day does not last long. It begins to vanish as it unfolds. I am attracted to the transient and contradictory quality that this moment in time offers and the metaphorical implications that it suggests. The paintings’ palette in the larger works is purposefully monochromatic removing the drama that color can provide, and leaving that to the imagination of the viewer.

These paintings are not supported by art historical references to past images of the landscape with a ‘modern’ twist. Some are fragmented, some are juxtaposed with repetitions, some include abstract rectangles that speak to that ‘in between’ place of what something is as one experiences it and what something is when it is imagined.